I read this story in the book Under God by tobyMac and Michael Tait. The story is so tragic and sad that I couldn’t help posting it here. Here is a short summary of what happened.

Old men, women, and children. These were the people that Colonel John Chivington attacked at Sand Creek in 1864. On that day, 163 Cheyenne and Arapaho were killed, two thirds of them women, children, and infants. Quoting from the story, which was quoting Silas Soule, a witness of the attack:

“It is hard to see little shildren on their knees have their brains beat out by men professing to be ‘civilized,'” wrote Silas. “One squaw was wounded and a fellow took a hatchet to finish her, she held her arms up to defend her, and he cut one arm off and held the other with one hand and dashed a hatchet through her brain. I saw two Indian’s hold one another’s hands, chased until they were exhausted, when they kneeled down, clasped each other around the neck and were both shot together.”… (Under God, pg. 333)

Our history is filled with so many atrocities just like this one. Wars, segregation, the KKK’s lynchings. So many horrifying stories. We’re seeing more of that even now: terrorist attacks, school bombings and shootings, ongoing worldwide slavery (including in the United States) and drug and alcohol abse.

It may seem like an impossible situation that’s out of our hands. We can’t change the past, but with the help of God, we can sure change the future. So ask him to show you how you can make a difference. And then do it.

This is the last part in our Hulk Smash series, unless I think of another topic. 😉 I hope that you’ve enjoyed this!

So many times in movies, books, and real life, actions are fueled by revenge. Not necessarily with the Hulk, but… well, I thought it needed to be in here. The Bible talks a lot about revenge, and what it says isn’t good.

Dear friends, never take revenge. Leave that to the righteous anger of God. For the Scriptures say,

“I will take revenge;
I will pay them back,”
says the Lord.

This verse even quotes another verse that talks about revenge. The message is clear. Never take revenge. Let the Lord AVENGE you. 🙂

Where did Paul go to prepare to preach the Gospel?

In the book of Revelation, what was the name of the old serpent?

On watching Jesus’ arrest and trial, what disciple claimed three times he didn’t know the Lord?

Brought to you by our Bible Trivia Challenger Calender. Answers will be revealed tomorrow.

I’ve finally gotten around to typing up this book review for the latest book from fellow blogger and writer Chris Martin. I hope you’ll buy his book and check out his blog after you finish reading this! 🙂

This was a great book. It told those same stories from the Bible in a new and interesting way. The first-person viewpoint is definitely a great asset in this book, helping the stories provoke emotion. The way Chris Martin develops the characters and draws us near to them makes you want to know them even better. I love how he uses the characters’ back stories to help us identify with them. It’s difficult to develop characters in the small amount of space available in short stories, and Chris does this wonderfully. His descriptions of the actions and emotions of the characters are also done very well. He tells the stories in such an emotional and thought-provoking way that you can’t help but feel for the characters. I love the way that Chris brings a new perspective to the stories he retells. I believe that these stories would even be interesting for non-believers. The only negative point of the book are a few small grammatical errors, which could easily be fixed with some extra proofreading and editing. Chris Martin certainly has a talent for writing that makes the stories and characters seem even more relatable. This book is definitely worth the read.

Girls, you need to read this book. It’s half-fiction, half-nonfiction. The story is wonderful, and Sarah Mally writes the advice in between the sections like she’s your older sister sharing her own experiences with you. It’s definitely a must-read, especially for girls who are boy-crazy or find themselves thinking about guys and dating a lot. Here are some of my favorite quotes (the ones in italics are from the fiction parts):

I hope everyone will enjoy reading this book! Read it! 🙂

Which “Great” was responsible for overthrowing the Babylonian empire?

Of these, which book comes before the others in the Old Testament (KJV)?

Of these, which book comes before the others in the New Testament (KJV)?

Brought to you by our Bible Trivia Challenge calender. 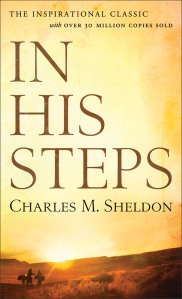 Personally, I like this cover, but there are plenty of others.

In His Steps Book Review

This book is wonderful. In fact, I think that every single Christian in the world today needs to read this book and follow the guidelines in this book. If you’ve already read it, good for you. Lend your copy to everyone you know. If you haven’t… read it. In fact, I want you to read it so much that I did a little searching on Amazon.com and found it free for Kindle here and less than a dollar here in paperback. And, in case you are wondering, I don’t have anything to do with the sale of In His Steps.

The story in this book is not only amazing and wonderful in itself, but it also is a great book for Christians, encouraging us to step out in our faith and to ask ourselves the question “What would Jesus do?” before doing anything. I’ll admit that this saying has become rather trite, but it’s still worth using to help make decisions.

Like I said, read this book! I loved it!

Make the books on your character’s bookshelf start mysteriously disappearing one by one. And he’d better find out why they’re disappearing before they all disappear, or else…

Your character finds a book written in a mysterious language that somehow will affect the outcome of his story.

Anyway, just thought I’d throw in a random update. There’s a new page called “The Bookshelf” with some of my favorite books on it. There’s going to be a little mix of a lot of things, and there’ll be new additions every once in a while, so keep checking it!

Other than that… have a great week! I pray that God will watch over you and guide you during any trials that you face this week. God bless!